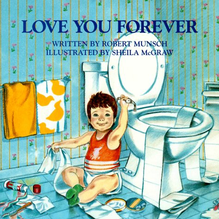 I'll love you forever, I'll like you for always, as long as I'm living, my baby you'll be.

Love You Forever is the story of a mother and her son throughout the course of the boy's life; describing his exasperating behavior throughout his youth.

In spite of the aggravation caused by her son's behavior, the mother visits his bedroom every night to cradle him in her arms, and sing a lullaby promising to love him forever. She continues to do this even when he is a grown man, and has moved out of the house. Eventually, when she is old and sick, he picks her up and sings the same song to her. Then he goes home, and sings it to his own child.

Love You Forever, which has been making people cry since 1986, is a Canadian picture book written by Robert Munsch. Munsch wrote it after he and his wife had two stillborn babies, and one of them died from an illness.