Literature / The Lotterys More or Less 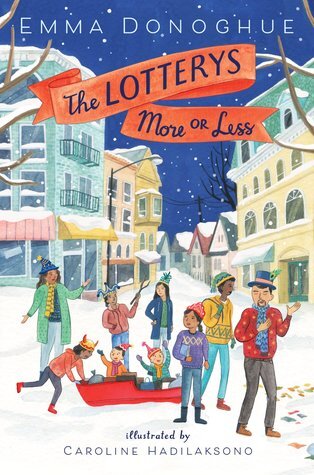 The Lotterys More Or Less is a novel by Emma Donoghue, and a sequel to The Lotterys Plus One.

It's Christmastime in Toronto, and the Lotterys have big plans. The Winter Solstice and saying goodbye to Luiz, their guest from Brazil, PapaDum and Sic coming back from helping converting an old factory in India into an apartment building for the homeless, the Saturnalia Banquet, taking a dip in the ice cold lake to help polar bears, and of course, Christmas! Sumac is really looking forward to it, and can't think of anything that could possibly spoil their festivities.

And then the ice storm hits.

Now power is out across half the neighbourhood, PapaDum's and Sic's flight has been delayed, and a good number of their intended plans have been cancelled. All of Sumac's excitement for the holidays is now threatened, and she's feeling this may go from the best Christmastime ever, to one that sucks like a jet-powered vacuum cleaner.

The Lotterys More Or Less contains examples of: