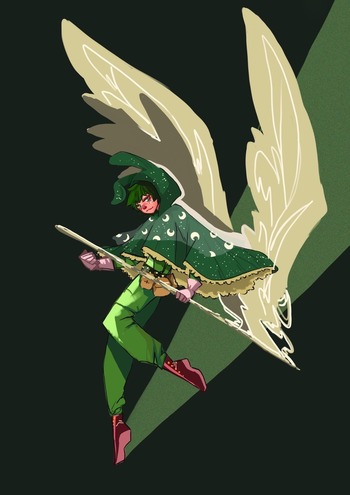 "The moon, the sun, the stars – all in harmony with one another - What’s your wish? What will you pay for it?"note All credit for the image belongs to its original owners

"Becoming a Cardcaptor wasn't on Izuku's bucket list, but he'll be damned if he doesn't make the best out of it."
—The story's Tagline
Izuku Midoriya has always been Quirkless. The useless "Deku" who will always be on the bottom rung of the totem pole solely for being unfortunate enough to be born without a cool superpower. But he always clung to his dream of becoming a superhero like his lifelong idol, All Might. In one story, he runs into All Might by chance after nearly getting killed by a supervillain. While his dreams were crushed that day, they were soon restored when a burst of reckless heroism impressed the hero enough to bequeath Izuku his power, putting the once powerless boy on the path to becoming the world's greatest hero.
Advertisement:

This is not that story.

Instead of sitting on the sidelines, watching and waiting for any sort of information that could help him become a hero, the Izuku Midoriya of this story is far more proactive. He begins taking note of everything in his hometown of Musutafu. Every alleyway, every store, every ladder. The park, the police station, the libraries, the schools, the soup kitchens and every other hole in the wall imaginable.

He may be an awkward kid, but it was easy for a nerd like him to strike up a conversation over heroes. After all, who didn't want to talk about them? Bit by bit, he starts doing good all around town, walking dogs, volunteering at hospitals, translating Latin scriptures for college students, and so much more. He may be Quirkless, but he's far from useless. Heck, even his bullies at school stopped bothering him when he worked up the nerve to punch Kacchan in the jaw before sprinting home.

This may not have been what Izuku had in mind when he said he wanted to be a hero, but life is good.

But one night, while he's helping Professor Miki translate a Roman tablet that arrived at the university, he sees something glint in the corner of his eye. Reaching inside a crate, he discovers an ornate book filled with strangely detailed cards. Out of curiosity, he reads the name inscribed on the bottom of the first one.

Suddenly, the cards are all ejected from the book by a massive gust of wind, scattering them all throughout the city. Then a little talking plush toy named Kero (who assures Izuku that he's not insane) cheerfully informs him that it's now Izuku's job to collect all 52 Sakura Cards as the newest Cardcaptor.

From there, Izuku's busy yet idyllic life begins to fall to pieces as he's dragged into a world of ancient magic, sleepless nights and some accidental vigilantism.

brilliant lights will cease to burn (by my hand i'll reignite them) is a My Hero Academia and Cardcaptor Sakura story written by novalotypo on Archive of Our Own. It follows Izuku's story as the Cardcaptor in a world where magic is scarce and Quirks are commonplace.

brilliant lights will cease to burn (by my hand i'll reignite them) provides examples of: