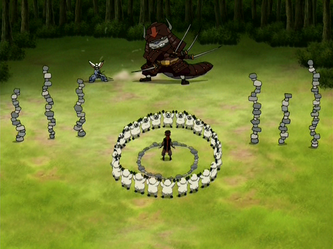 The surreal nature of Aang's daydreams threaten to overwhelm him.
"During the meeting, I was the perfect prince. The son my father wanted. But I wasn't me."
— Zuko has a realization long in coming

The invasion is four days away, and Aang begins to feel nervous about confronting the Fire-Lord. Feeling that he is unprepared, he trains constantly and loses sleep, causing him to hallucinate and have nightmares. After three straight days of insomnia and increasingly bizarre Sleep-Deprivation Sambas, it takes the collaboration of Sokka, Toph, and Katara to get him to finally sleep and feel confident about facing Fire Lord Ozai.

Meanwhile, back at the Fire Nation Capital, Zuko has trouble re-adjusting to his old life. Despite Mai's best efforts to calm him down, he can't shake the feeling that the Avatar is alive, his father still doesn't trust him, and that something is just wrong. He almost misses a war meeting because he thinks Ozai doesn't want him there, but eventually attends when it turns out that Ozai was actually waiting for him. However, something in the meeting hits him hard and finally drives in the realization that he's been working towards since the start of the show- his path was not honorable, and he didn't really want Ozai's approval.

After a series of nightmares in which Aang is forced to face the Fire Lord pantsless (among other things), he decides to pull a reversal.

Example of:
"Not Wearing Pants" Dream

After a series of nightmares in which Aang is forced to face the Fire Lord pantsless (among other things), he decides to pull a reversal.