Literature / It's a Good Life 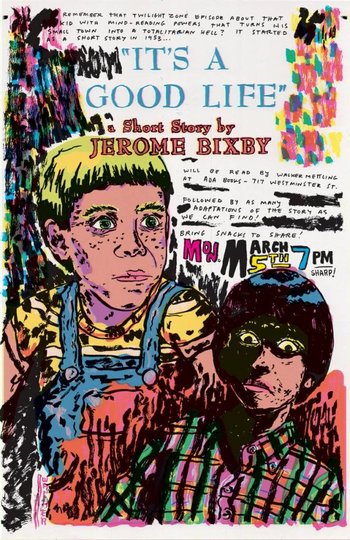 A 1953 short story — er — a very good short story by Jerome Bixby, set in the small town of Peaksville. The town used to be in Ohio, but it has since been completely cut off from the outside world (assuming the outside world still exists) by the first manifestation of Anthony Fremont's powers.

Anthony Fremont is literally omnipotent. He's also only three years old and had his powers from birth. He's not completely human.

The plot of the story shows a day in the life of the town. It does about as well as you would expect under the thrall of a being with the power of God and the moral understanding of a three-year-old who's never been disciplined in his life, i.e. pretty crappy.

This story has been adapted several times by The Twilight Zone. The original series did a very faithful adaptation, with Bill Mumy as Anthony and Cloris Leachman as his mother Agnes; the only major change being that the character of Anthony was aged up to six. The 2002 revival series had a sequel episode, "It's Still a Good Life", featuring a grown-up Anthony (played again by Bill Mumy) and his daughter Audrey (played by Mumy's real-life daughter Liliana Mumy), who also has powers. Cloris Leachman also returned as Agnes. Twilight Zone: The Movie gave the story a Setting Update to the 1980s (with Anthony terrorizing a single mansion rather than an entire town) and the happiest ending that the premise would allow.

The TV series Johnny Bravo and The Simpsons both also did episodes which are homages/parodies of this story.

Compare and contrast with minus.. Definitely not to be confused with It's a Wonderful Life. It's still a good life, though. Yes, a very good life indeed.

The original story provides examples of:

It's good that we have a page for this work, it's real good...
Feedback