Literature / Keeper of the Lost Cities 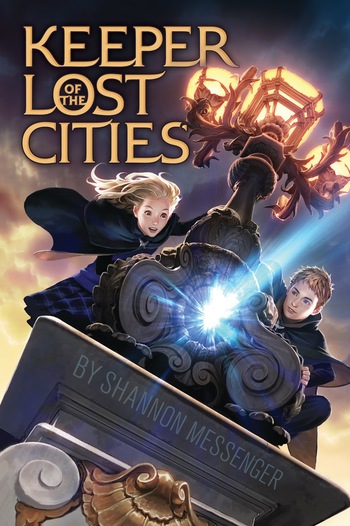 Keeper of the Lost Cities is a series of middle grade fantasy novels by Shannon Messenger.

After a brain injury when she was five years old, Sophie Foster has been able to hear the thoughts of others. While this might sound useful, it's been nothing but a pain to Sophie; she can't turn it off and she can't tell anyone for fear of being turned into an experiment. It's just another thing that makes her different from her peers: despite being only twelve, she's already a high school senior. Due to all of these differences, she's resigned herself to never fitting in, not even among her loving family.

Then, during a class trip to a museum, she meets a boy whose mind she can't read. This has never happened before, and the stranger somehow knows about her secret ability. He introduces himself as Fitz, telling her that she's an elf and a Telepath. Apparently, his father, Alden, has been looking for her for twelve years. Though skeptical at first, Sophie quickly believes his story when he shows her the Lost Cities, lands inhabited by elves and other fairy tale creatures.

In the blink of an eye, Sophie's entire world is turned upside down; she leaves her human family to live with a pair of elves who become her new guardians. She attends an elvish school called Foxfire where she has to unlearn all of her human knowledge while also learning how to hone her telepathic abilities. She manages to find a few friends in Dex, a laid-back carefree boy who hates Fitz; Marella, a girl who doesn't care about what others think of her; Keefe, an Empathic mischief maker; and Biana, Fitz's younger sister, all of whom make the transition into her new life a little smoother.

Unfortunately, Sophie still can't quite manage to totally fit into her new world. Despite only recently learning about the existence of elves, she somehow knows confidential information that only the ruling elves are privy too. As her life with her kin develops, Sophie will discover that not everything is peaceful in paradise, and her existence may be one tiny piece in an ever-changing puzzle.

The series includes the following titles:

that a film adaptation was in development, with Ben Affleck set to direct and co-write.