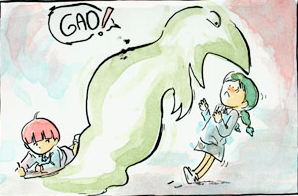 A webcomic by Ryan Armand that ran for 130 episodes from February 2006 to July 2008. The original website is down, but it can still be found on archive.org

minus note No, that's not a grammar error; her written name actually starts with a lowercase m is an elementary school girl. She is sometimes mistaken for a boy. She has a very powerful imagination and can do anything she wants. The things she does are fickle and whimsical, as well as mischievous and vindictive. She is, after all, a child.

She has very few friends, apart from a green-haired girl, the beings that minus wills into existence, and the ghosts.

It should be noted that this webcomic is not recommended for grownups, who may find it disturbing.

Compare and contrast with "It's a Good Life".

Also, yes, both the character and the strip are spelled with a lower case "m".