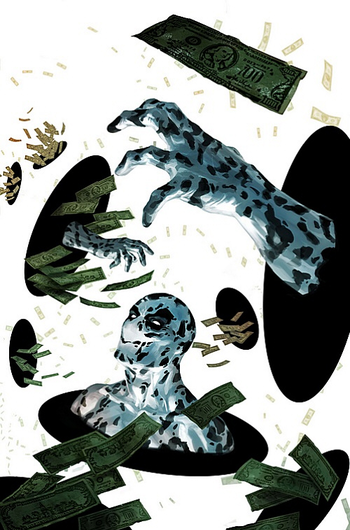 Once this guy spots you, good luck escaping.
"Xayide and her giants drove through the earth and into the underworld of Fantasia; here they could travel with the speed of darkness, which was faster than the speed of light."
— Narration, The Neverending Story II: The Next Chapter
Advertisement:

Teleportation is an awesome power to have. Even with the risks involved, it's hands down the best way to travel in fiction and in fact, it tends to be a case of winning the Superpower Lottery. A hero with this ability could simply whisk up to a MacGuffin, dump The Dragon in jail, spring the Damsel in Distress from her cell, and spray holy water on the Big Bad before he even shuffles off his throne.

This is why heroes tend not to have the power to teleport, or at least not with the ease and grace of their villain. Because it's such a huge advantage and potential conflict killer, giving a villain the power of teleportation will make most heroes' lives that much harder and the conflict that much more uphill. After the hero clears out all the enemies in the hidden temple, the villain will teleport in and snatch that MacGuffin right out of the hero's hands.

This can be combined with a Circling Monologue to taunt the hero from just out of their reach. When combat starts, they'll use Teleport Spam to avoid being attacked and whack the hero upside the head. However, don't expect them to just shoot the hero... or teleport half of them somewhere else.

Their evil teleporting will be black and smoky for extra creepiness. If it's given a flavorful description, their teleporting power will come from The Dark Side, or cutting a path through the Dark World or some equally nasty Hell facsimile; alternatively, they may travel through the shadows. If the heroes can teleport, it'll often be in a much more limited manner, having limits in range or precision or "casting time" that make it impossible to use with the same devastating effects a villain can, or at the very least requiring them to have some sort of MacGuffin to pull off.

Not to be confused with Offscreen Teleportation, which is when someone merely seems to have such a power because we never see how they manage to be somewhere else so quickly; this trope is about villains who canonically have teleportation powers.