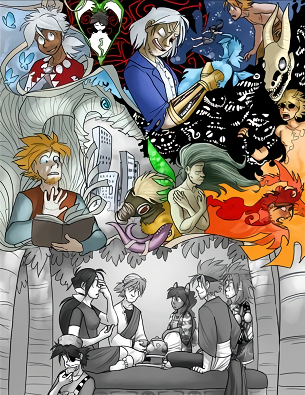 It's a bit of a long, complicated story. (and this isn't even halfway through!) note Clockwise from the top left (colored): Prince Paollo, Raven, Captain Snow, Riley, The Shadowmandyr queen/possessed Simon, Blitz, Dragonfly, a Scraptor, Tuff and the Listing of Names. And at the bottom (monochrome) from left to right: Blitz, Credenza, Tuff, Queen Deliza, Riley, King Mikel.
Advertisement:

A webcomic by H. L. Devera.

Credenza, an ordinary waitress, discovers a man washed up on the shores of Ruin Island. He is wounded and on the brink of death, but with Credenza's help is able to recover. The only problem? The man's mind has been shattered; gone are his sanity and memories, including his name. Credenza gives him a new one, Blitz, and earns his undying loyalty. Follow Credenza, Blitz and their friends as they become entangled in a colossal battle between good and evil, journey to new parts of the Archipelago, and learn much more about themselves than they could've bargained for.

The Author had mentioned a potential spin-off/follow-up that would take place in the same universe, and then on March 2nd 2017 she announced City of Somnus

, which is scheduled to start in August of the same year.

Can be found at the official site

as well as the creator's deviantART page

With the closure of Smackjeeves, many links may be defunct.

Taking you to the Archipelago...