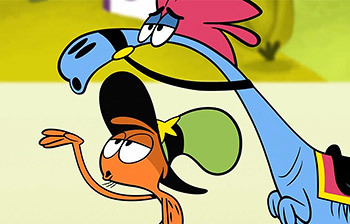 "You got a bunch of guys about to turn blue. We're breathing again. Thanks a lot."
— NASA mission control during the Apollo 11 landing
Advertisement:

Humans instinctively hold their breath during tense situations. This is probably an evolutionary holdover from back when we had to hide from predators, as holding one's breath reduces the amount of noise a person makes, possibly keeping them alive if a predator is nearby. This makes the act of taking a breath all the more rewarding when the predator finally leaves. Even now, when hiding from predators is no longer a regular occurrence for people, we still inhale and exhale deeply in response to stress relief.

Whether it be a bomb ticking, a pending execution of an innocent party, a plane doing a nose-dive or one of other countless many situations of a tense or suspenseful nature, characters shown experiencing the nail-biting, breath-holding uncertainty of pending doom will inevitably breathe heavily when the situation relaxes.

Compare Hyperventilation Bag and Deep Breath Reveals Tension. Can present as Visible Sigh. Is sometimes paired with Take a Moment to Catch Your Death if the writers are feeling particularly cruel.