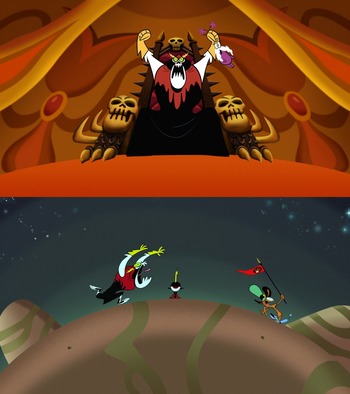 Season One: The galaxy's greatest supervillain.
Season Two: Angrily playing a game of Capture the Flag and losing.
Because stories often only have a limited amount of time to develop their characters, as well as a need to introduce new characters to keep things fresh, certain major characters tend to get pushed to the back burner in favor of others. However, the writer isn't exactly keen on simply getting rid of these characters, but they still would rather focus on others. So what do they do with them? How about turning them into Comic Relief instead?
Advertisement:

And so the character that used to tag along with the main cast has faded into the background, and is only brought back into the spotlight to be treated as a Butt-Monkey. Alternatively, they might be an antagonist who was a threat when they were introduced, but return as comedic failures because the heroes have outgrown them or because they just can't keep up with the main antagonists.

Often, this trope is a result of the story having a large cast, and depending on who it happens to, can result in characters losing previously established traits in favor of others. If a villain undergoes this, it's often a side effect of Villain Decay.

You can expect the fandom to be divided on this. Sometimes it's generally seen as the character being re-written to justify stripping them off their dignity, other times it seems to make the character much more charming and likeable. The later is more likely if it's treated as a natural progression of their personality, or if the character was already seen as flat or disliked by a large majority.

This is a Sub-Trope of Demoted to Extra and Comedic Relief Characters. May overlap with Badass Decay. Compare to Demoted to Satellite Love Interest and Adaptational Comic Relief. Compare Shoo Out the Clowns where the already comic relief character gets pushed out for more dramatic moment/storyline.