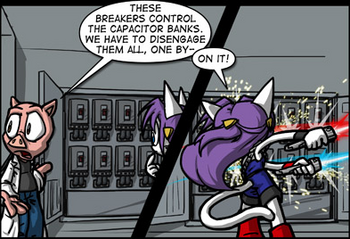 When all else fails, sometimes the easiest way to turn off a thing that needs to be turned off is to break it.

Characters occasionally come across situations where a device in their vicinity that is integral to the plot; more specifically, integral to derailing the plot, and it has to be prevented from doing so. But such devices rarely come with an "off" switch, so what are the intrepid heroes to do?

Why, smash it to bits, of course! When there is simply no better option available, you might as well.

Compare Percussive Prevention when this tactic is applied to a character rather than an object. Contrast Percussive Maintenance, which is using violence to get stuff working again. Can overlap with Percussive Therapy if the continued failure to deactivate the stubbornly functioning device becomes a source of frustration for the character. Supertrope to Shoot the Television and Ring-Ring-CRUNCH!. Compare Cut the Juice for a more conventional shutdown procedure.