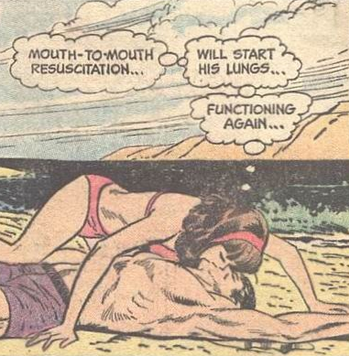 CPR is an emergency first aid protocol performed on an unconscious person in whom normal breathing cannot be detected. It's characterized by someone pressing rhythmically against a victim's chest and occasionally blowing air into the victim's mouth. In Real Life, CPR stands for cardiopulmonary resuscitation, and, contrary to common belief, is a preservative protocol rather than a revival protocol; its purpose is strictly to keep people alive long enough for them to receive actual medical care in a hospital emergency room;* Not that a patient won't revive during the CPR process, but that is not its intended function its success rate: less than 10%. On TV, though, CPR stands for "clean, pretty, and reliable":

This is a sub-trope of Worst Aid and sister trope to the Magical Defibrillator, another medical technique that works very differently on TV than it does in Real Life. A specific subtrope is Heart in the Wrong Place, which shows CPR given with the compressions too far to the left. For an equally clean, pretty, and reliable healing technique, see Psychic Surgery.

For more information about CPR in Real Life, see the Useful Notes page. (That page is not meant to be a guide for how to actually perform CPR in real life; if someone near you actually needs CPR and you're not certified to perform it, call emergency services instead.)