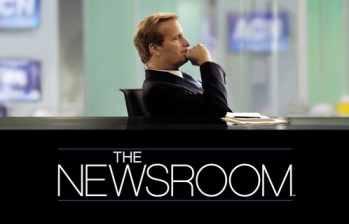 Will: Everywhere I look, people are dressed up in costumes, screaming about how bad government is!
Don: What's your position?
Will: That people should know what they're screaming about.
Advertisement:

The Newsroom (2012-14) is an American television dramedy series on HBO, created by Aaron Sorkin, which chronicles the behind-the-scenes events at a fictional cable news channel as they reported real events from recent history. The ensemble cast is headed by Jeff Daniels as News Night anchor Will McAvoy, who, together with his staff, sets out to put on a news show "in the face of corporate and commercial obstacles and their own personal entanglements." Other cast members include Emily Mortimer, Alison Pill, Dev Patel, John Gallagher Jr., Olivia Munn, Thomas Sadoski, Sam Waterston and Jane Fonda.

Sorkin, who created the Emmy Award-winning political drama The West Wing, was reportedly developing a cable-news-centered TV drama as early as 2009. After months of negotiations, premium cable network HBO ordered a pilot in January 2011 and then a full series in September that year. By the time the second episode had been broadcast, HBO had renewed The Newsroom for a second season.

Sorkin did his research for the series by observing several real-world cable news programs first hand. He serves as executive producer, along with Scott Rudin and Alan Poul.

HBO renewed the series for a shortened third & final season in November & December of 2014.

Not to be confused with the Canadian sitcom of the same title.

The Newsroom provides examples of:

Seriously, I have a TV Tropes page?