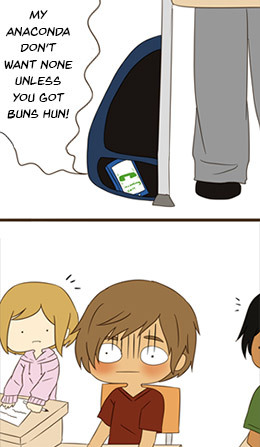 A character's cellphone goes off at an inconvenient moment, and the song they use is their ringtone is something they'd be embarrassed by. The Jerk Jock might have the Theme Song from some incredibly geeky television series as his ringtone. The Wicked Cultured villain's ringtone may be a crappy auto-tuned pop song. The Heteronormative Crusader's ringtone may be a song about having Intercourse with You with someone of the same sex. The ringtone of Colonel Badass may be something uncomfortably cute and cheery. The Evil Luddite will be embarrassed to have a ringtone at all. Or one could always just go with a ringtone that anyone would be embarrassed by.

If the character is attempting to be mysterious or intimidating at the time, or attempting to win the trust/approval/respect of someone who finds the song's content objectionable, this is doubly likely to happen. Expect them to answer the phone as quickly as possible just to end the song, and be very grumpy towards the caller.

It isn't always the character's actual phone, but may instead be a phone belonging to someone else that they're holding onto for some reason. At times it may be a ringtone that wouldn't usually be embarrassing, but the situation makes it inappropriate. See Funny Answering Machine, Funny Phone Misunderstanding, Mistaken for Prank Call, Prank Call, and The Operators Must Be Crazy for more phone gags.