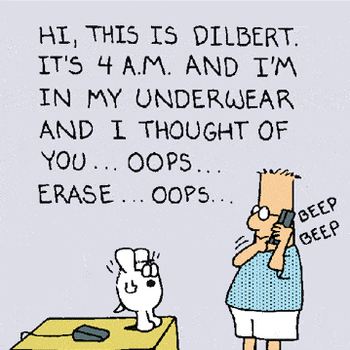 Jones: People who leave voicemails?
Kensi: Oh, God, no, I hate it. Write a text like everybody else.
— NCIS: Los Angeles, "Can I Get a Witness?"
Advertisement:

Oh no! You just left the most embarrassing voicemail ever! But it's not that big a deal, right?

The voicemail is usually left by someone to a person they feel easily humiliated around (a love interest, a boss, or a parent). Maybe they accidentally made a Pocket Dial while revealing a secret. Either way, the person who receives the voicemail is usually away from home (or their mobile phone if you can believe it) and won't hear it until they get back to the machine. So, rather than admitting their true feelings or owning their embarrassment, the person would rather get to the answering machine first and delete it. This could be by Wall Crawling an apartment complex, visiting the person's house to feign interest (and erase the message behind their back), or secretly fumbling around on the person's phone to delete it. This usually results in the message-recorder being caught, and Cringe Comedy ensues. In this respect, there's a lot of cross-over with Irrevocable Message.

Other uses of the trope is when someone leaves an embarrassing voicemail, but is so unaware that they make no effort to amend it. They could be the typical love fool who desperately asks someone out on the phone. In general, the person is so uncomfortable with sharing their feelings to the person that they'd rather do it over the phone and avoid the physical interactions.

In some cases, it's someone else's voicemail that causes the embarrassment. They could be about doctor's results, unpaid bills, or messages from your loved ones. In a house full of other people, it's understanding why someone might want to delete those before anyone else listens to it.

Although the trope has been modernised in recent years (now that everyone practically carries around their own answering machine of some kind), the height of its popularity was in the '90s and early 2000s when answering machines were being used the most. Lightweight, affordable, and uncomplicated answering machines with large capacities started really hitting the market in the '80s, but perhaps the resurgence of the studio Sitcom genre in the '90s (with shows such as Seinfeld, Friends and Frasier hitting screens) made the simple answering machine such an easy Stock Shtick.

Compare with Irrevocable Message, What Did I Do Last Night?, Love Letter Lunacy.