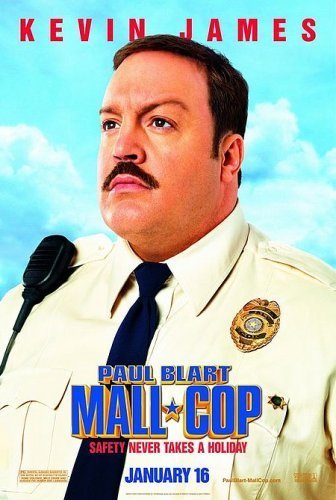 Blart is at large!
Paul: Sir, I took a sworn oath to protect this mall and all inside it.
Brooks: What oath? We don't have an oath.
Paul: I... sorta made up my own. It's on a plaque in my room.
Advertisement:

Paul Blart: Mall Cop is a light-hearted comedy released in 2009, starring Kevin James. The plot follows a portly, kindhearted security guard who after failing to realize his dream of becoming a law-enforcement officer due to his hypoglycemia, Paul instead becomes a well-known figure at The Mall and plans to retake the police entrance exam he once failed. Despite no one showing him any respect and having no real legal authority, he treats his job seriously and makes an effort to enforce orderly shopper conduct whenever possible.

This all changes when a bunch of foolhardy bank robbers make a bid to pull a heist on the busiest shopping day of the year. Paul finds himself trapped inside and forced to do battle with the violent criminals, utilizing his own skills, bravery and knowledge of the mall layout to undermine their plans to rescue the hostages, including his girlfriend Amy Anderson (Jayma Mays) and his daughter Maya (Raini Rodriguez).

A sequel was released in 2015. In the sequel, Blart attends a security convention in Las Vegas, only to stumble upon an art heist led by Vincent Sofel (Neal McDonough), and he and a group of fellow security guards must stop them.

The second movie provides examples of: