You and What Army? 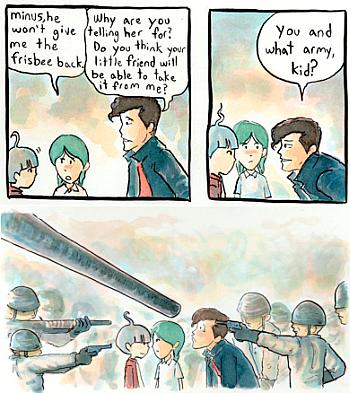 "The trouble is, when you say to a general 'You and whose army?', he just has to point out of the window."
— Major Clarkston, Monstrous Regiment

Somebody retorts to some threat, request, or demand with "Oh yeah? You and what army?" The phrase is supposed to be one of defiance, as if to say it will take an army to stop/defeat them. Usually come in three tastes:

A form of Tempting Fate, and one of those Stock Phrases that will have teammates, and oneself, yelling variants of "You Just Had to Say It, didn't you?!" For obviously related reasons, liable to Threat Backfire.

Million Mook March and Flaunting Your Fleets are ways to preemptively answer this question via Gunboat Diplomacy.