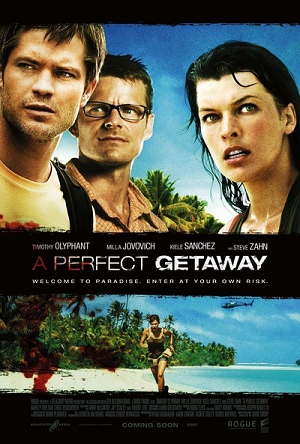 "Come on, nothing bad ever happens in Hawaii, right?"
—Cliff
Advertisement:

A Perfect Getaway is about Cliff and Cydney. Cliff and Cydney are newlyweds who have decided to spend their vacation in Hawaii. Then, they find out when they get to a second island that a pair of serial killers— a man and a woman— are on the loose on the islands. They then run into Kale and Cleo, a pair of suspicious hitch-hikers and Nick and Gina, a self-proclaimed "American Jedi" and his girlfriend. All three couples wonder if the other two couples are the killers, all while wandering farther and farther from society and deeper into the jungle...