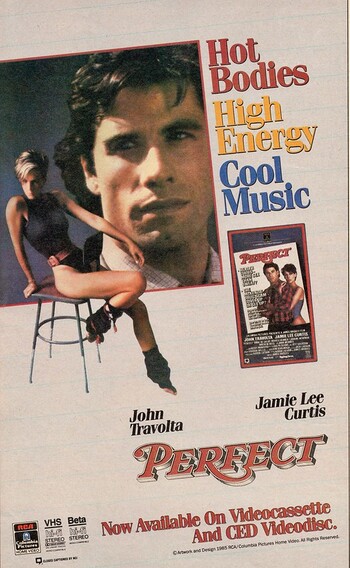 Getting your body in shape has never been this scandalous...
Advertisement:

Perfect is a 1985 romantic drama film directed by James Bridges, starring John Travolta and Jamie Lee Curtis. The film was inspired by Rolling Stone articles in the 1970s about popular Los Angeles health clubs written by Aaron Latham, who co-write the film script with Bridges.

Rolling Stone reporter Adam Lawrence (John Travolta) is tailing a New York businessman who is being charged with drug possession and is trying to get an interview with the man for the article he wants to publish for the case. His assignment takes him to Los Angeles, where he sees a chance to start getting material for an exposé on fitness clubs and how they're "turning into the singles bars of the '80s". During his investigation, he meets aerobics instructor Jessie Wilson (Jamie Lee Curtis), a member of one of LA's most popular fitness centers who has her own checkered past with the press. As Adam starts looking more into the stories of Jessie and other club members, his skills and even morality are put into the test.