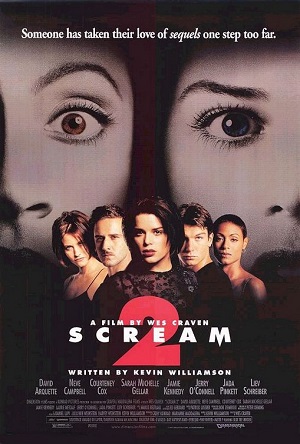 Scream 2 is a 1997 slasher movie directed by Wes Craven, from a screenplay by Kevin Williamson. It is the second film in the Scream franchise.

Two years after the original killing spree in Woodsboro, Sidney Prescott (Neve Campbell) is now a college student at Windsor College, still struggling to recover from the trauma she suffered from her dealings with Ghostface. When a slasher movie based on her experiences called Stab is released in theaters nationwide, Sydney is forced to relive the nightmare when a new Ghostface wrecks havoc on the university.