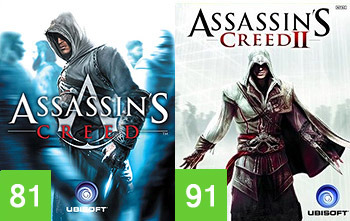 Now with 80% less pointless Fetch Quests!
"Halo 2 is a lot like Halo 1, except it's Halo 1 on fire going 120 miles per hour through a hospital zone chased by helicopters and ninjas. And the ninjas are all on fire too."
— Jason Jones, Official Xbox Magazine
Advertisement:

The rule usually holds that the second work in a series, decent though it may be, simply can't stand up to the glory of the first. Indeed, for many a series, when all is said and done, a consensus forms that First Installment Wins.

The exception to this conventional rule is the Even Better Sequel, which are largely (if not unanimously) thought to top the already-good original. In many cases, this is either the result of or comes along with a genre shift, as instead of just trying to top the original, the makers will be trying something entirely new (see the Alien and Terminator examples). In addition, this seems to be common with sequels to superhero films. This may be because genre conventions demand (or at least, strongly encourage) a Super Hero Origin story in the first movie, which takes up a good chunk of the plot and screen time with a relatively uninteresting everyman character before we even get a chance to see any super-heroics. Sequels tend to work well if any change is organic, or a plot was built up in the previous installments.

It's possible that in the musical world, Even Better Sequel is the rule rather the exception, considering that an artist's first album (though still good) may have been recorded when they were still trying to figure out their style. Or it's simply that their first album was produced cheaply: all in one take using cheap instruments and cheap equipment. If a label isn't sure that a musician is a good investment, they aren't going to give him/her the best stuff to work with. A successful first album can mean access to better equipment, an instrument upgrade and getting more studio time: all of which can contribute to the second album just having better quality sound and therefore being better, even if it's essentially the same as the first one.

Also relatively common in video games, where the sequel is often built on the technological and fictional foundation of the first. This significantly reduces the time needed to come up with or adapt new technology or build the game's world, and allowing the developers to focus on enhancing the things that work and prune the things that don't. Not to mention having a library of visual, sound and script assets stored up, making development more like putting together a puzzle than like creating a world. Sequels in any medium may also benefit from the higher budget and greater creative freedom that are afforded to a proven franchise, provided the beancounters have the good sense to refrain from executive meddling. This also applies to literature, where an author's work is generally regarded to improve after their first published efforts. In fact, prejudice against sequels typically applies only to film, whether or not such an attitude is justified.

If the sequel becomes so influential and successful that it shapes future installments afterward, then you have a Franchise Codifier.

Not to be confused with Surprisingly Improved Sequel, where the sequel is "even better" only because the original wasn't all that good.

When it happens within individual seasons, that is Growing the Beard.