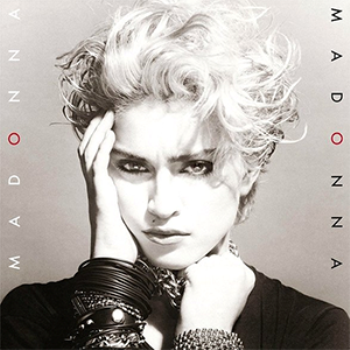 You must be my Lucky Star
'Cause you shine on me wherever you are
Something in the way you love me won't let me be
I don't want to be your prisoner
So baby, won't you set me free?

Stop playing with my heart
Finish what you start
When you make my love come down
If you want me, let me know
Baby, let it show
Honey, don't you fool around

Just try to understand (understand)
I've given all I can
'Cause you got the best of me
"Borderline"
Advertisement:

Madonna is the self-titled debut studio album recorded by the American pop musician of the same name. It was released through Sire Records on July 27, 1983.

It contains her first three hits "Lucky Star", "Borderline" and "Holiday". At the time the album sold well, but got mixed reviews. After the success of her next album Like a Virgin (1985) it was re-released in Europe with a different album cover and title: Madonna The First Album. Madonna herself has somewhat of Creator Backlash over the album in the sense that she still likes the songs themselves, but felt that she didn't receive enough creative input in the production.

"Bring back all of those happy tropes":