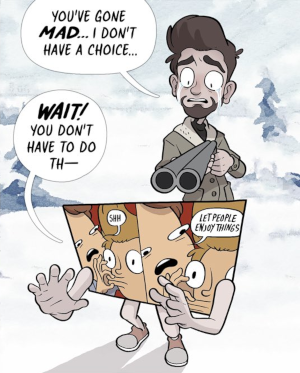 It's over.
"I've come to hate my own creation. Now I know how God feels."
— Homer Simpson (on his song "Everybody Hates Ned Flanders"), The Simpsons, "Dude, Where's My Ranch?"
Advertisement:

Fandom is an interesting entity. Nobody can quite tell how people will react to anything, making the creation of a popular work a crapshoot. However, it's assumed that most creators hold an equal or greater amount of affection for their work than their fans. After all, they had to actually make it in the first place. So obviously, anything that's popular must be something the creator likes, right?

Not quite. See, the creators are people too, and even if they're the origin of a particular work, that doesn't stop them from holding a negative opinion about it. This is what is referred to as creator backlash. It's the most high profile form of hatedom possible, since it's the very creator(s) of the work denouncing it. As they bring up their feelings of hatred for their work in interviews, public forums, and their other creations, it brings a certain amount of discord into being a fan when the very source has denounced it. It might even trigger feelings of betrayal, or resentment that the author has (apparently) become a holier-than-thou hypocrite.

It can take on many forms and for many reasons. Many creators feel their work has been ruined by Executive Meddling. Perhaps the creator didn't really intend for it to become so popular, only making it to pay the bills and fund their more serious work (perhaps even getting forced into continuing it). Perhaps people completely miss the point. Perhaps it has them typecast to a sickening level. Perhaps the project that he puts a lot of effort on gets pathetic reactions from fans. Perhaps they were going through a rough time while making it. Perhaps they thought it was great at the time but, in hindsight and with a more "mature" perspective, think otherwise. Perhaps it has become their only work that is generally known, casting them as a "One-Hit Wonder" in the eyes of the majority. Maybe they thought they could have done better. Maybe they begin to think The World Is Not Ready. Perhaps it's all of the above.

It is quite common for creators who start early to simply grow out of their early work. Added to which is the common artistic trait of always wanting to move on: the criticism is just an expression of boredom; been there, done that.

Or perhaps they just really do hate the work they created after all this time; maybe their personality (or the effect the work has on today's society) really has changed that much. The reasons are as myriad as the reasons a fan might choose to like their work in the first place.

Not all creator backlash is permanent, though. They can just as easily choose to later embrace their work when they get over whatever was troubling them in the first place. This seems to be quite rare, however. When it does happen, it usually seems to occur after a lengthy period of time has passed between appearing on the show and the present.

And, of course, no matter how bad the backlash is, the artists rarely return any of the cash they've made from a work.

Compare Old Shame (where the work in question neither caught on nor has many redeeming qualities in the first place), compare and contrast Bleached Underpants (where the work in question has questionable history which its creators would like to dispose of) and see also Magnum Opus Dissonance and Disowned Adaptation. Overlaps with Canon Discontinuity if the creator removes a disliked work from the series canon entirely.

This can sometimes result in creators going uncredited for their part in the work, with some going as far as removing their name from the credits.

open/close all folders
Arts
Automobiles
Music Videos
Mythology and Religion
"And God saw that the wickedness of man was great in the earth, and that every imagination of the thoughts of his heart was only evil continually. And it repented the Lord that he had made man on the earth, and it grieved him at his heart. And the Lord said, I will destroy man whom I have created from the face of the earth; both man, and beast, and the creeping thing, and the fowls of the air; for it repenteth me that I have made them." (Genesis 6:5-7)
Podcasts
Puppet Shows
Radio
Tabletop Games
Theater
Web Animation
Miscellaneous
Feedback

Molly was planning on debuting her Fista-Puff comics in her school newspaper but chickens out when she realizes her comics is basically her diary in drawing form. Instead, she decides to draw a farting bean and while everyone at her school loves it, she absolutely hates it.

Molly was planning on debuting her Fista-Puff comics in her school newspaper but chickens out when she realizes her comics is basically her diary in drawing form. Instead, she decides to draw a farting bean and while everyone at her school loves it, she absolutely hates it.