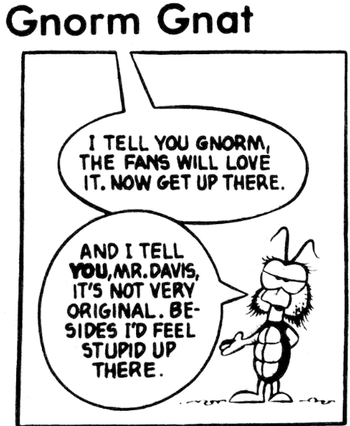 A typical example of the strip's Self-Deprecating Humor.
Advertisement:

A short-lived comic strip created by Jim Davis, later of Garfield fame. Running from 1973 to 1975 in the Pendleton, Indiana Times, the strip featured the comedic misadventures of a group of bugs.

While Davis had attempted for many years to syndicate Gnorm Gnat, he met rejection from publishers who felt that a strip with insect characters was unmarketable. Gnorm Gnat ceased on Christmas Day 1975, with a final strip in which Gnorm wishes the city of Pendleton a Merry Christmas. Davis then went on to start Jon, a predecessor of Garfield.

Despite its obscurity, Gnorm Gnat has been subject of a number of references by Davis in the intervening years, most of them negative. The strip has also proven extremely hard to find, with fewer than three strips having been known to exist prior to July 2019.