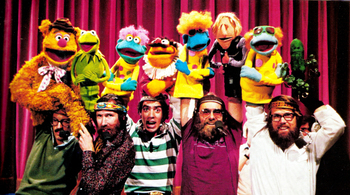 The Muppet performers are a group of people who have brought Jim Henson's various puppet characters (The Muppets and others) to life on shows like The Muppet Show, Sesame Street, and Fraggle Rock and in many feature films. They usually do both the puppeteering and the voice of their characters.

The Muppet Performers and their works provide examples of: