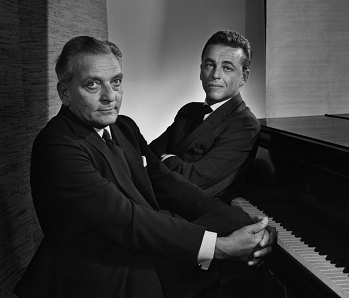 The songwriting partnership of American lyricist/librettist Alan Jay Lerner (1918–1986) and Austrian-American composer Frederick Loewe (1901–1988). Along with Rodgers and Hammerstein, they are responsible for some of the most famous stage works of the 20th century, including My Fair Lady and Camelot. Their works combined the musical styles of the Austrian operettas and waltzes Loewe grew up with and Lerner's urbane, witty lyrics.

They did much of their work during the mid-20th century. Loewe, a musical prodigy, first met Lerner, a radio scriptwriter, in 1942. They collaborated on two unsuccessful plays before scoring a hit with Brigadoon. Despite this success, Lerner and Loewe had frequent disagreements that caused them to go years without collaborating; after Camelot, Loewe announced his retirement, though he briefly reunited with Lerner in the early 1970s. Several of their works also received film adaptations, usually with Lerner writing the screenplays.