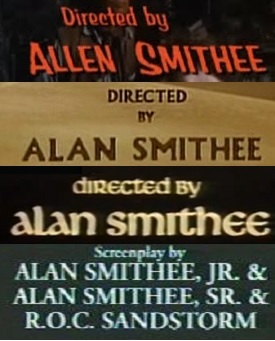 Hollywood code for "You have been warned. Proceed with caution." (Though kudos to Alan for giving his son a break in his writing career.)note These are Mr. Smithee's credits for, from top to bottom, Death of a Gunfighter (really Don Siegel and Robert Totten), the television cut of Dune (1984) (really David Lynch), Appointment with Fear (really Ramsey Thomas) and The Nutt House (really Sam Raimi and his brother Ivan, with Bruce Campbell as R.O.C. Sandstorm).
Advertisement:
"David Lynch refuses to have his name attached to certain cuts of the film, because many of the final decisions were taken completely out of his hands and he was so thoroughly bummed with how they turned out that he didn't want to be associated with them. Judging by his filmography, if Lynch had gotten his way, Dune would've been utterly indecipherable as opposed to merely confusing."
— Cracked, "5 Famous Filmmakers Whose Dream Projects Were Disasters"

Alan Smithee (his first name was sometimes also spelled Allen) was one of Hollywood's longest-working and most diverse filmmakers.note (the Internet Movie Database also lists credits for, among others, writing and acting) From the start of his career in 1969 to his retirement in 2000, he directed dozens of films in practically every genre you can think of, as well as episodic television and even music videos. Though his work was of highly-variable quality, with some films suffering outright backlash, he continued, undaunted, with a truly-admirable rate of productivity.

It helps that he didn't actually exist.

See, in the movie industry of the past, if a director's movie became the victim of Executive Meddling and bad acting to the point where they were no longer proud of it, he could request to have his name taken off it, and it would then be credited to "Alan Smithee".

There were, of course, rules about the use of the name - for instance, the studio would have to admit that they had wrested the film from the director's control. Directors using the alias were also required to keep their reason for disavowing the film a secret.

Before 2000, Smithee was the only alias Directors Guild members were permitted to use. This was changed because of the comedy film An Alan Smithee Film: Burn Hollywood Burn, which revolves around a director who wants his name removed from his film, but is stymied by actually being named Alan Smithee. Bad press surrounding the film combined with director Arthur Hiller wanting his name removed due to studio interference created an odd metatextual tangle where, under DGA rules, An Alan Smithee Film had to be credited to Alan Smithee, causing the name to be retired. Since then, aliases are selected on a case-by-case basis. However, the popularity of the name is such that Smithee's IMDB page has several post-2000 entries (none of which are presumably under DGA jurisdiction).

Coincidentally, "Alan Smithee" is also an anagram of "The Alias Men". Compare this to the use of the name "Nicolas Bourbaki