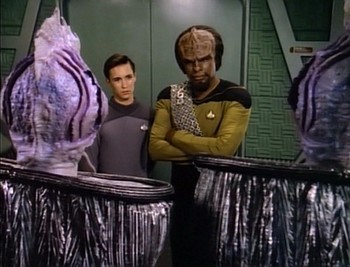 "What a handsome race."
Advertisement:

Picard is again playing host to some dignitaries who want their planet to join the Federation. These particular dignitaries are Antedeans, who are essentially fish people, and conveniently enough they like to hibernate when they travel so all Picard has to do is clear out a space for them and have the medical crew check on them from time to time until they reach their conference. The ship’s on track to have an uneventful mission for once, when suddenly Counselor Troi senses something ominous approaching, something that spells big trouble for the Enterprise – that’s right, her mom’s back. Lwaxana Troi has been selected to represent Betazed at the conference, and the Enterprise is to transport her there. Let the hijinks commence!

It all starts off with Lwaxana informing Picard of a diplomatic dinner that he is to attend, a dinner which in reality is more of a date. He falls for it, and Lwaxana comes on strong until he manages to weasel out of it by contacting Data to deliver a long, boring lecture for them. It turns out that Lwaxana has just reached the age when Betazoid women are at their sexual peak, and it’s making her a little man-crazy. Deanna confronts her about it, asking how she’s going to keep it under control, but Lwaxana, as you’d expect, says she’s just going to enjoy it. But she’s also going to focus her desires on one man whom she will eventually marry. She goes on to insist that Picard is totally up for it (side note: he is not).

Picard reacts by dashing away to the holodeck and entering his Dixon Hill program. He tries to relax and enjoy the ambiance, but he has a hard time of it because the computer keeps having the NPCs try to kill him. Meanwhile, Lwaxana tours the ship in search of someone else to throw herself all over. After considering a few options, she finally settles on Riker, to Deanna’s dismay. Riker and Data join Picard in the holodeck to figure out what they should do, only for Lwaxana to follow them there. She doesn’t understand what’s going on, thinking that the dingy bar in the simulation is an actual part of the ship, and that the NPCs are real people. In fact, she becomes quite interested in Rex the bartender, intrigued that she can’t read his thoughts. Picard and Riker decide that they’ll have to tell her, but that they should let her have her moment first.

When the Enterprise arrives at the conference, everyone leaves the holodeck, Lwaxana quite embarrassed about her misunderstanding. The Antedeans wake up, and Lwaxana immediately can read their minds and casually informs everyone that they’re actually assassins planning to bomb the conference. Worf leads them away, and so Lwaxana Troi leaves the Enterprise, not having found a man but at least having saved the day. She even seems to have Captain Picard’s genuine respect for once, but she can’t help ruining the moment as she’s beaming away with her trademark gag: “Jean-Luc, shame on you for thinking such a thing!”