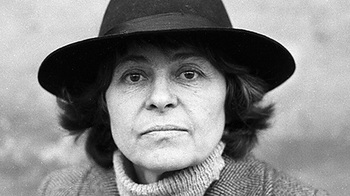 Kira Muratova née Korotkova (November 5, 1934, Soroca — June 6, 2018, Odessa) is the first Soviet, then Ukrainian arthouse director. Her films are somewhat esoteric, she has an aesthetic of her own. Although she never had a mainstream success, it created her a very devoted cult following.

She commenced in The '60s when her first successful movie Brief Encounters (somewhat reminiscent of La Notte by no means to be confused with that film by David Lean) was made. She starrted in the film with Vladimir Vysotsky. It was not seen well by the Soviet censorship.Her second acclaimed film, 1971's The Long Farewell resulted in her ban from filmmaking though she somehow still made one more film in 1979. During Perestroika she returned with her arguably (though not definitely) main work The Asthenic Syndrome. Later she made several films already in the independent Ukraine.

Muratova's characters exist each in its own world and are unable to comunicate. They don't listen to each other and often chew they own phrases, repeating them until they lose any sense.

Films with their own pages