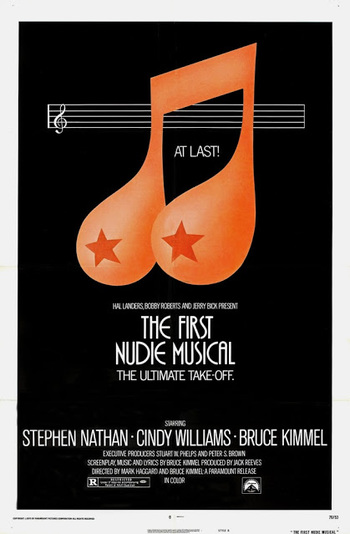 The First Nudie Musical is a 1976 comedy/musical, co-directed by Mark Haggard and Bruce Kimmel; Kimmel also co-stars and wrote the screenplay and the songs.
Advertisement:

Schechter Studio was a proud independent company during The Golden Age of Hollywood. By The '70s it's been reduced to making sleazy Pornography. Harry Schechter (Stephen Nathan), the son of the studio founder, has to fend off his greedy backers, who think that the studio is about to go belly-up and want to replace it with a shopping center. Looking for a surefire hit porno that can save the studio, Harry hits on the idea of making an X-rated musical. His backers agree, but add two stipulations that seem guaranteed to sink the project: the film has to be finished in two weeks, and he has to hire John Smithee (Kimmel), the nephew of one of the backers, as director. John, who lacks any knowledge of either filmmaking or sex, proves to be a disaster, and it's up to Harry and his devoted secretary Rosie (Cindy Williams) to keep things afloat.

Made in three weeks on a budget of $150,000, the film's odd mix of irreverent comedy and memorable production numbers earned it a cult following.

"Orgasm sure has 'em Tropin' all night long":