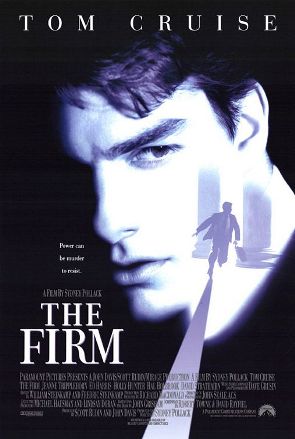 "They made him an offer he should have refused."
"Power can be murder to resist."
Advertisement:

The Firm is a 1993 legal thriller, based off the 1991 novel by John Grisham, starring Tom Cruise as a young attorney who gets in over his head when he begins working for a law firm with many secrets.

Mitch McDeere (Cruise) is a recent Harvard Law graduate who is offered a prestigious position as a litigator at the law firm Bendini, Lambert & Locke, headed by co-founder Oliver Lambert (Hal Holbrook), and soon finds himself showered with gifts, money and a new car. At the same time, he strikes up a friendship with senior partner Avery Tolar (Gene Hackman) and begins to learn the ins and outs of the law field. Mitch and his wife Abby (Jeanne Tripplehorn) are living the good life — until two associates who worked with the firm are mysteriously murdered. Unaware of what's going on, Mitch is contacted by the FBI, headed by Agent Wayne Tarrance (Ed Harris), and told that the firm is a corrupt group of lawyers with massive influence and connections to the mob. Faced with the prospect of losing his career and his wife, and with more people being murdered, Mitch realizes the only way he'll get out alive is to follow his own plan.

The Firm was the first film adaptation of a Grisham novel, and featured an All-Star Cast of actors. The film was commercially and critically successful (racking up $270 million against a $42 million budget), and led to further adaptations of Grisham's works.

A television series based on the film began airing in January 2012 on NBC, and was developed by Entertainment One Productions. The plot picks up ten years after the events of the movie, with Mitch (played by Josh Lucas) and his family deciding to leave the FBI's Witness Protection Program in order to "take back their lives". After he attempts to start his own law firm in Washington, McDeere is solicited by a bigger firm, Kinross & Clark, who brings him onboard as a litigator. At the same time, the son of one of the mob bosses indicted as a result of Mitch's actions a decade before swears vengeance on the attorney and his family.