Thrown from the Zeppelin 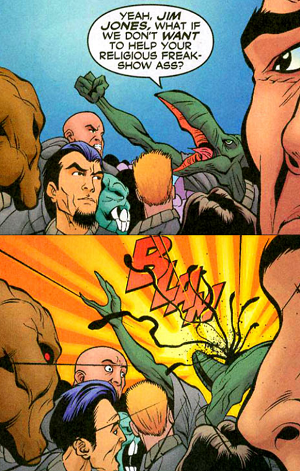 "So, does anyone else want to drop out?"
— Max Zorin, A View to a Kill
Advertisement:

A villain has a grand scheme, but not necessarily the resources to pull it off. He calls together a room full of potential allies and outlines the plan.

But these guys are generally businessmen, used to being pitched at, and sometimes one will stand up and announce that it sounds too risky (or that guy's just more squeamish than the rest), and he wants out. Sometimes, so as not to risk scaring the rest, the villain will graciously allow him to leave, and remind him not to talk about it. He will ask his henchman to "show him out." The Henchman will nod, smile, escort him from the room and kill him, thus ensuring total loyalty and secrecy for his evil plot. The rest of the time, he'll throw the man out right there and then, usually followed by a quip to the nature of "anyone else?".

An occasional variant of the trope has the villain making the same pitch to individuals or multiple small groups rather than gathering all of them together at once. One such example is If Looks Could Kill, where the Big Bad kills a finance minister who rejects his pitch after mentioning that multiple other people he's met with agreed to it.

Compare and contrast Board to Death, where all of the businessmen are killed.

Not to be confused with a scene where a someone is literally thrown out of a zeppelin, like in Indiana Jones and the Last Crusade or K. For that, see Death Flight, Thrown Out the Airlock, and Death in the Clouds.

[Trope Namer] When one of Max Zorin's investors refuses to take part in his Evil Plan to destroy Silicon Valley, Zorin orders May Day to have him thrown out of his zeppelin.

[Trope Namer] When one of Max Zorin's investors refuses to take part in his Evil Plan to destroy Silicon Valley, Zorin orders May Day to have him thrown out of his zeppelin.