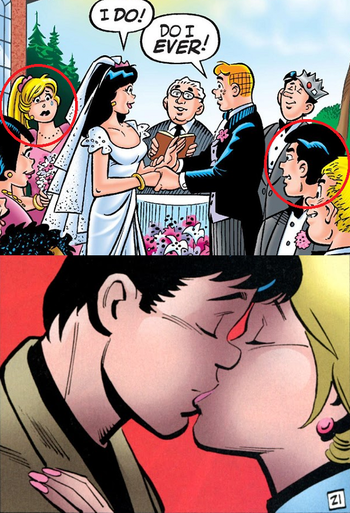 Well, they have this much in common...
Advertisement:

Charlie has an unrequited crush on Alice; meanwhile, Doris has been desperately trying to win over Bob's affections. However, Alice and Bob are the ones who ultimately end up getting together.

When Alice and Bob finally go from Unresolved Sexual Tension to Official Couple, Charlie and Doris are left in the cold. Still, both of them have experienced the pain of heartbreak and unrequited love — so why not hook them up together? They may not have any initial attraction to each other, but they can always hang out and reminisce about their similar failed romances, and somewhere along the way, they might just find mutual love with each other like their former partners have.

While it's nice to see Charlie and Doris get a happy ending of their own, this device can very easily reek of red string puppetry and make viewers suspect that the creator just paired them off to permanently get them out of the main couple's way.

Differs from No Loves Intersect in that the leftover pairings are not immediately obvious and the involved people are initially just part of the Love Dodecahedron. Results from Conservation of Detail, since many viewers (and some writers) simply wouldn't "buy" the spares getting over it by, say, dating outside the closed social circle of the cast to get away from the drama.

See Ship Mates for when the fandom does this in Fan Fic. Compare Sexual Karma, Lonely Together, Beta Couple, Everyone Must Be Paired (where the majority of the cast ends up with a love interest, whether or not they had been involved in the Love Dodecahedron). If the 'spares' were originally after the same love interest, see Pair the Suitors.