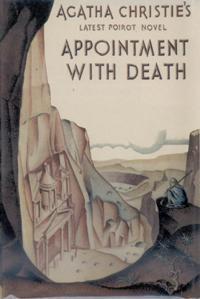 A Hercule Poirot detective novel by Agatha Christie published in 1938.

The novel has been adapted multiple times. Christie herself made a stage play in 1945 that removed Poirot from the story and changed the ending. A movie adaptation directed by Michael Winner was released in 1988 featuring an All-Star Cast, including Peter Ustinov, Lauren Bacall, Carrie Fisher, John Gielgud and Piper Laurie. In 1992 it was adapted for radio by BBC Radio 4 with John Moffat as Poirot.

It has also been adapted by ITV's Poirot as part of the 11th season, starring David Suchet as Poirot. Like many other episodes, the TV adaptation features many changes to the plot and characters. Tropes for the TV adaptation can be found on the page for the series.

Appointment with Death contains examples of: