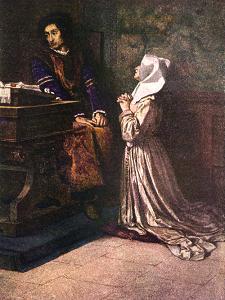 "Go to your bosom; knock there, and ask your heart, what it doth know that's like my brother's fault."

"Some rise by sin, and some by virtue fall."
— Escalus

A tragicomedy by William Shakespeare. It is one of Shakespeare's problem plays, because although it is technically a comedy, its dark storyline and ambiguous ending are not the typical comic fare. If written in today's time, the play would probably be considered a dramedy. The play is famous for its frankness regarding sex: One of the secondary characters is a pimp, Claudio's problems start with premarital sex, and the main plot involves a corrupt official trying to get a religious novice to sleep with him.

Vincentio, the duke of Vienna, is concerned that laws forbidding fornication are not being observed in the city. He resolves to set out on a journey, leaving Vienna in the hands of his adviser, Angelo. This is, in fact, a ploy: the Duke actually plans to disguise himself as a friar and live among the commoners, so he can figure out how to better serve them. It also gives him an opportunity to see how Angelo would rule Vienna if the Duke really did go away.

Angelo is a much stricter ruler than the Duke, and enforces the laws on fornication ruthlessly. He quickly allows power to go to his head, as demonstrated by his treatment of Claudio, a young man who got his fiancée Juliet pregnant. Although Claudio is more than willing to marry Juliet, Angelo sentences him to death, so he may serve as an example to other lustful men. Claudio's sister Isabella, a nun in training, is convinced by the libertine Lucio, a friend of Claudio's, to plead his case with Angelo.

Angelo meets with Isabella. It becomes clear he is a hypocrite when he offers to spare Claudio's life if she agrees to sleep with him. She refuses to sacrifice her virginity for her brother's life; Claudio begs her to reconsider, and she coolly suggests Claudio get his affairs in order. She won't sleep with Angelo, and no one will believe her if she accuses him of coercion.

Fortunately for Claudio, the Duke has been watching carefully from the sidelines. He has a scheme that will set all to right: Angelo had previously agreed to marry a woman named Marianna, but reneged on his promise when her dowry was lost at sea. The Duke proposes that Marianna disguise herself as Isabella, and sleep with Angelo instead. This is referred to as "the Bed Trick."

However, after the sex, Angelo fears his hypocrisy might be discovered. He (surprise surprise) goes back on his word and orders that Claudio be executed. The Duke then proposes a new scheme, called "the head trick": Instead of Claudio's head, they will send the head of another, actually guilty prisoner. Unfortunately, the only criminal up for execution is too drunk to be killed. Just in the nick of time, a random pirate dies of fever, and so his head is removed and sent to Angelo.

The Duke decides he has played dress-up long enough and resumes his role as ruler of Vienna. Isabella and Marianna petition him, claiming Angelo wronged them, but the Duke feigns ignorance. Angelo blames everything on the mysterious friar who's been hanging about, and he's backed up by Lucio; the Duke leaves and returns disguised as the friar, whereupon Lucio accuses him of various crimes. The Duke finally reveals himself, and sets everything in order. He forces Angelo to marry Marianna. He then condemns Angelo to death, but pardons him when Marianna is joined by Isabella, who still believes that Angelo is responsible for her brother's death, in pleading for mercy. He then brings out Claudio, alive and well, and reunites him with Juliet; he condemns Lucio to marrying the whore who bore his child but pardons his life; and finally, he makes Isabella an offer of marriage. Her reply is never given, and the play ends with everyone going to the Duke's palace.

As noted above, Isabella's reply to the proposal is not given. Though general consensus is she marries the Duke, it's up to the director to decide whether or not she accepts his offer.

Measure for Measure provides examples of: