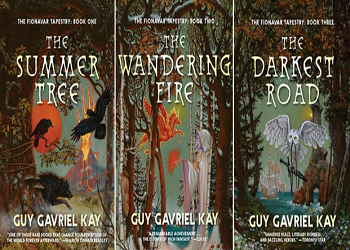 The Fionavar Tapestry is a trilogy of High Fantasy novels by Guy Gavriel Kay, set partly in our own contemporary world, but mostly in the fictional world of Fionavar.
Advertisement:

The trilogy is set firmly and consciously in the Tolkien tradition of High Fantasy. Kay has said that one of his motives for writing it was to show that the 'matter' of High Fantasy was deep enough to be used in various original ways, and that the genre did not have to become debased into nothing but pale Tolkien imitations.

The Tapestry tells the tale of five young Canadians, Kimberly (Kim) Ford, Jennifer Lowell, Dave Martyniuk, Paul Schafer and Kevin Laine, who are taken to Fionavar, the first of all worlds, by Loren Silvercloak, a mage of that world. Ostensibly invited to come as guests of the court for a celebration of the anniversary of the monarch's ascension to the throne, all five students quickly find that their roles in Fionavar are far more complex than they originally expected.

The book is well known for keeping good track of its numerous characters, drawing a good amount of its themes and setting from Celtic and Norse Myths, as well as Arthurian Legend.

The story is divided into 3 books:

It is also available in a collected edition.

While most of Kay's other novels are set in the same multiverse as the Fionavar tapestry, Ysabel (published in 2007) is an actual sequel. Set in twenty-first century Provence, twenty-five years after the events of The Fionavar Tapestry, it tells the tale of Ned Mariner, a Canadian teenager, who find himself involved into an ancient hatred between two cursed souls. With his own second sight barely awakening, and the advice of his aunt Kimberly, who is by then married with Dave (who also appears), Ned has to find a way to free one of his friend who has become a part of the curse, before she is gone forever.

Is now trying to get a character sheet.