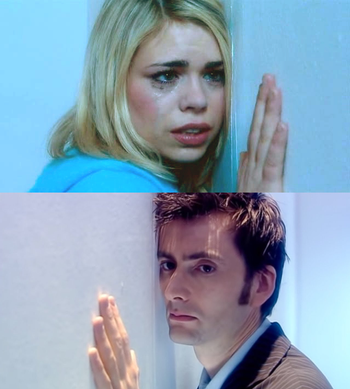 "I made my choice a long time ago and I'm never gonna leave you."
— Rose Tyler to the Doctor.
Advertisement:

The one where the Daleks and Cybermen have a sass-off, 38 years overdue.

The episode begins with a variant of the final scene of "Army of Ghosts" as the four Daleks leave the Void ship, accompanied by something they refer to as the Genesis Ark. These four are a Dalek special forces team known as the Cult of Skaro, designed to think like the Daleks' enemies in order to more efficiently battle them, and, most unusually for Daleks, they all have individual names (Sec, Thay, Jast and Caan). After Rose, Mickey and Dr. Singh claim they all know about the Daleks and the Time War, Sec demands that they identify which of them is "least important". Dr. Singh ends up volunteering. Sec and two of his underlings extract information from his head using their plungers, which of course also extracts his life.

Sec sends Thay to investigate their surroundings. Thay soon comes upon a group of Cybermen and Sec realizes that Earth is already being invaded. The Cybermen offer to join forces with the Daleks, but Sec refuses and Thay effortlessly kills the Cybermen near it, with the Cybermen's weapons unable to even penetrate the Dalek forcefield. The Cybermen tell Thay that the Daleks have declared war on the Cybermen, but Sec responds that it will not be war but "pest control" and saying that the 5,000,000 Cybermen would not stand a chance against a single Dalek, much less four. Deciding to test those odds against her own experience, Rose mentions one single Time Lord against four Daleks. The Daleks cringe in fear.

While talking with the Doctor, the Cyber-Leader is quite suddenly killed by a parallel universe strike-team led by Jake. He takes the Doctor back to his dimension and reunites him with that dimension's Pete Tyler, who found out about their version of Torchwood and used its resources to battle the Cybermen. Knowing they were losing, the Cybermen jumped dimensions when the Void ship weakened the barrier between worlds. Pete reveals that his Earth is undergoing the early stages of catastrophic global warming, and the Doctor tells him it's because of the constant crossing of the barrier. The Doctor says he can seal the breach permanently, and that he has a plan to do so.

Rose has realised that as the Daleks have not killed her or Mickey, they must need one of them to open the Genesis Ark. When Mickey questions why the Daleks do not open it themselves, Sec reveals that it's actually Time Lord technology which needs the one thing Daleks cannot provide: skin contact. Sec demands that Rose open it; she refuses and recounts to Sec how she, as Bad Wolf, used the power of the Time Vortex to kill the Dalek Emperor. The Doctor makes his entrance at this point, but does not recognise the Genesis Ark for what it is. He uses his sonic screwdriver to activate detonation charges that blow the doors to the room, allowing their temporary Cybermen allies in to battle the Daleks alongside Torchwood and generally creating one hell of a battlefield.

Mickey stumbles and accidentally touches the Ark while escaping, and the Daleks take it outside. It opens and begins disgorging millions of Daleks, who attack the Cybermen and normal humans indiscriminately. The Doctor finally realizes the Ark was a prison ship and, like the TARDIS, is bigger on the inside...

The Doctor, Rose, Mickey and Pete encounter Jackie, and she and the parallel Pete have an awkward moment before embracing. The Doctor explains his plan by stating that anything which crosses dimensions becomes saturated with the energy of the Void, and that by opening the breach between the worlds into the Void instead of world-to-world, everything with that energy will be pulled into the Void, after which the breach will seal itself forever. This means all the Cybermen and Daleks, but unfortunately also means the Doctor, Rose, Mickey, Jake and Pete. The Doctor says that he can use some purloined Torchwood items to keep himself safe but is unwilling to risk Rose's life.

From this point on, Rose's actions closely mirror the previous series' finale: Pete takes Rose to safety back across the barrier. Rose, however, immediately uses the transportation device Pete put on her to return to the Earth dimension, and tells the Doctor she will never leave him. They activate the ghost shift device, which begins drawing in all the Cybermen and Daleks, with Dalek Sec realising what is happening and using an emergency time travel device to escape. One of the levers that controls the device slides out of position and Rose leaves her anchor to pull it back into place, once again saving the world...

But since Billie Piper had announced her departure before this episode aired... yeah, you can guess what happens next.

Pete reappears for an instant and grabs Rose before she falls into the breach, then takes her back to his dimension as the breach seals itself. Rose completely breaks down as she realises she can never see the Doctor again.

Several months later in the parallel dimension, Rose awakens from hearing the Doctor calling to her in a dream. Pete, Jackie and Mickey believe her and they follow the signal to Norway, ironically, a place called Bad Wolf Bay. There Rose sees an image of the Doctor, who tells her that he managed to find one more small breach between the universes, but that he is using the energy from a supernova just to have enough power to talk to her. He tells her that the breach will close permanently in two minutes, and they share a final conversation, with the Doctor telling her that she and Jackie are missing and presumed dead, and Rose surprising the Doctor by telling him that Jackie and Pete have got together and Jackie is three months pregnant. She breaks down in tears and finally tells the Doctor that she loves him. The Doctor, whom we now know did love her back, replies that she deserves to know how he feels about her. He takes a deep breath, says her name once more, and gets halfway through "I–" before the connection's gone.

A heartbroken Rose is consoled by Jackie, while in our dimension the Doctor stands motionless in the TARDIS. He slowly begins to regain his composure and somewhat lackadaisically operates the TARDIS, then gets a case of Mood Whiplash as he looks up and sees a woman in a wedding dress demanding to know where she is.

Note: Series 1 of Torchwood (as well as Ianto's flashback in series 2's "Fragments") begins sometime after this episode.

Two universes: one where Pete died, another where Jackie died. Both still deeply love one-another even though they are from separate realities.

Example of:
Doppelgänger Gets Same Sentiment

Two universes: one where Pete died, another where Jackie died. Both still deeply love one-another even though they are from separate realities.