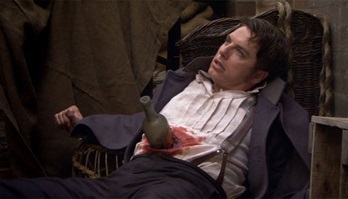 Yep. There's some fragments in this story, alright. Bottle fragments.
Owen: If you're not a figment of my imagination, then I don't know what's happening anymore. Maybe this is what a mental breakdown feels like.
Jack: You're fine. It's the rest of the world that's delusional.
— Owen Harper getting acquainted with Captain Jack Harkness before joining Torchwood
Advertisement:

A series of bombs make a building collapse on top of the gang (minus Gwen, who slept in). Buried in rubble, they have flashbacks...

After Jack was left behind by the Doctor, he travelled to the 19th century and got stuck there. When he found out that he was immortal several decades later, his first few weeks of eternal life were spent alternately drinking and dying a lot while yelling about the Doctor. Torchwood Cardiff (consisting, true to form, of two beautiful women in a lesbian relationship) noticed him, dragged him off the streets and into the Hub, and killed him a few times over again for science. They convinced him to become a freelance agent. The Cardiff tarot-card girl told him that he'd have to wait over a century for the Doctor to show up, and Torchwood reminded him that the organisation exists to stop the Doctor in the first place, so Jack decided to stay on and reform Torchwood with his knowledge and expertise.

When Tosh' mother was kidnapped by terrorists, she was forced to become a corporate spy inside the Ministry of Defense. She stole alien weapon blueprints and made a sonic gun for the terrorists. UNIT captured her, convicted her of military espionage and stripped her of all her human rights. After she spent months in bare-bones solitary confinement, Jack realized that Tosh was a genius: she was able to make the weapon even though the blueprint was wrong. He pulled some strings with UNIT and got Tosh to join Torchwood, but she could never see her mother again.

When Torchwood London was destroyed and Lisa was nearly converted to a Cyberman, Ianto began stalking Jack and trying to get a job with Torchwood Cardiff. Jack refused. One Weevil hunt, one very good cup of coffee and one captured pterodactyl later, Jack and Ianto had developed some serious UST, and Ianto had a job.

The bomb was planted by Captain John Hart, but everyone survives. John has found Gray, Jack's brother. Oh, and he stole their car.