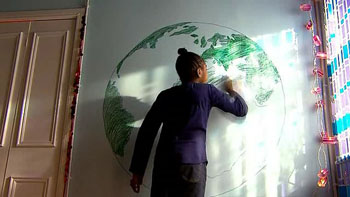 Evil, yes… But a pretty damn good artist…
The Doctor: It's graphite. Basically the same material as an HB pencil.
Rose: I was attacked by a... pencil scribble?
Advertisement:

The one with a magic nursery rhyme.

Alternatively, the one that demonstrates what happens when you have to make a story confined to a cul-de-sac.

The Doctor takes Rose to see the opening ceremonies of the 2012 London Olympics, landing in a neighbourhood of outer London. They quickly find a few things amiss: children and pets have gone missing, and a road crew, preparing for the running of the Olympic torch through the area, is baffled by a spot in the road that causes cars passing over it to stall out. As they examine the area, they are attacked by... a ball made from squiggly lines?

After dealing with the ball, the Doctor uses his cheerful nature to quickly identify the problems coming from the home of Trish and her daughter Chloe. Chloe seems aloof and separated from the real world, focusing on drawings that cover her walls; Trish attributes it to her troubled childhood with her dad years ago. Rose looks at the drawings and swears that she saw one move.

The Doctor quickly identifies that Chloe has been taken by an alien lifeform, an Isolus, normally part of billions traveling through space but stranded alone on Earth from a solar flare. To cope, it has formed a psychic bond with the lonely and depressed Chloe, giving her the power to trap people and objects in pictures that she draws; it also allows her to bring such pictures to life, as briefly evidenced by the monstrous drawing of her father in the back of her closet. Fortunately, the solution is simple: they just have to find the Isolus pod, provide it power to reactivate it, and the Isolus will have a way to rejoin its own family. Easy, right?

The Doctor and Rose go to the TARDIS, and the Doctor builds a detector to locate the Isolus pod. Oh, and the Doctor off-handedly tells her (and reminds the audience) that he was a dad once. Rose doesn't look like she was prepared for that. They start to head back to the street, Rose walking in front, and there is a crash of glass. Rose turns to find both the TARDIS and the Doctor have vanished.

Rose rushes back to Trish and Chloe's house to find that, indeed, Chloe has trapped the Doctor and the TARDIS in a picture, and refuses to release him.

Rose returns to the street and recalls the area on the road. Finding it warm, she digs it out with a pickaxe grabbed from the road worker's van and finds the Isolus pod, no larger than her fist. Now she just needs a power source.

The broadcast of the opening ceremonies has started, but Chloe, still angry, draws out the entire crowd at the scene; the announcers are stunned when the entire crowd disappears. But Chloe is not done yet and, clearing away a section of the wall, starts drawing the entire planet Earth. Rose tries to get Chloe to stop without success, but she spots the Doctor's picture, where he points to the Olympic torch. Rose understands and races outside, throwing the pod at the passing torch. The Isolus says goodbye to Chloe, departs her body, and reunites with the pod, and all of the disappearances begin to reverse: the children, the stadium audience...

...and Chloe's horrific drawing of her father. As they flee from the animated figure, Trish and Rose are able to calm Chloe enough to dispel the drawing, leaving them safe.

Rose has yet to see hide or hair of the Doctor, despite the pictures being empty. Meanwhile, the torch runner approaches the stadium but stumbles, dropping the torch before it is picked up by a familiar-looking man — the Doctor. He runs the last leg of the torch to the Olympic flame and lights it; combined with the emotional response from the ceremony, it gives the Isolus pod enough energy to take off into space.

Sometime later, the Doctor has reunited with Rose, saying goodbye to Trish and Chloe, and taking off to watch the Games together. Rose comments that their companionship can never be separated, but the Doctor fears that a storm is coming.

For the next six years, David Tennant was expected to show up for the real deal, with even groups on Facebook and petitions

asking for it. In the end, Tennant was not involved. However, a different incarnation of the Doctor has indeed carried the 2012 Olympic torch for a leg