Tears from a Stone 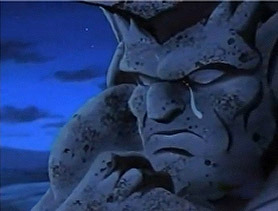 It's emotional now, but wait 'til erosion sets in.
"The rain just falls off of me
The tears just fall off of me
'Cause I'm waterproof, I'm waterproof
The barometric pressure has no relevance to me."
— Sparks, "Waterproof"
Advertisement:

Boys don't cry. Neither do statues, nor robots, nor things that generally lack tear ducts. But, if you really want to crank up the pathos or despair, have something that can't cry shed a tear—perhaps saline, or perhaps some more appropriate liquid. Often effective, occasionally Narm.

To count as Tears from a Stone, the tears should be one or a few and should be viewed as surprising or miraculous and played for pathos. Crying from anthropomorphic robots or magical creatures, for example, is usually just crying.

Cynical souls may explain away in much the same manner as Sand In My Eyes — rain or the like.

Tears from a Stone may have magical properties, such as breaking a spell in much the same manner as a kiss. They may also be used to show that the "stone" is actually a living person who has been Taken for Granite. Darker examples may involve Tears of Blood.