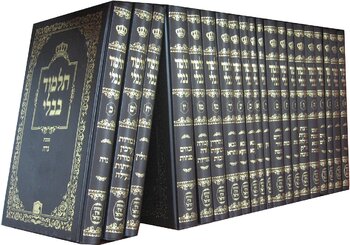 A collection of rabbinical discussions of Jewish customs and theology. It is divided into the Mishnah (written about 200 CE), which is the first written collection of Jewish laws; and the Gemara (about 500 CE), which is a discussion of the Mishnah and Jewish works, including what Christians know as the Old Testament. Intellectual study and discussion of the Talmud has an important role among the customs and history of many Jews. If you have a story in which one of the characters is a rabbi, you can be fairly sure that they know a lot about the Talmud. And if you wish to debate them or hear them expound, you will get what you ask for.

The Mishnah is written in Hebrew, while the Gemara is a mixture of Hebrew and Aramaic. The Talmud is about 2,800 pages long and is composed of six "orders", each of which is further comprised of several "tractates". The orders are:

Nezikin, Moed, and Nashim, being the three most practical of the bunch, are the most commonly studied. Kodshim is virtually useless, as there is no temple in Jerusalem right now (though Tractate Hullin gets some attention, as kosher butchery is big business). Much of Zeraim is considered to apply only to Eretz Yisrael and as such non-Israeli rabbis don't have much use for it (Israeli rabbis, on the other hand, do have some use, particularly since religious Jews started taking up farming as part of the Religious Zionist movement...although not that much use, since modern mechanized farming reduces the number of people needed to run a farm). Some parts of Zeraim do have wider use, however (e.g. the first tractate Berakhot, dealing with when and how to say prayers and blessingsnote The basis for its inclusion in the otherwise agricultural Zeraim is a subject of debate, including in the Talmud itself.). As for Tohorot...

Although there is only one Mishnah, there are technically two Gemaras: The Talmud Bavli (Babylonian Talmud) and Talmud Yerushalmi (Jerusalem Talmud). Almost universally, whenever anyone talks about the Talmud, they are referring to the Talmud Bavli. Most of the Jewish scholars of the time were in Babylonia, and the vast majority of commentaries and places of study revolve around the Babylonian Talmud. The main exception (perhaps unsurprisingly) is in discussions of Zeraim, as the Talmud Bavli says nothing about that order outside Tractate Berakhot, while the Talmud Yerushalmi expounds at length on the agricultural laws as well.

The Talmud is not simply a list of laws. It has an entirely unique style, being culled from notes and conversations spanning decades, and is an attempt at codifying the Oral Torah. There are plenty of arguments (most unresolved), much back-and-forth (you will probably need charts to keep track of some of it), many detours and anecdotes, a smattering of mysticism and a whole lot of stories that make practically no immediate sense, and to which commentators have devoted volumes to deciphering the deeper meaning. To give a secular comparison, the written Torah is like written statute law, while the Talmud is more like a collection of case law and law review articles; the comparison to The Common Law is apt, as the Oral Torah operates much like the American legal system in that precedent is usually followed unless there is a reason in the Torah to arrive at a different conclusion.

Oh, and did we mention that there are no vowels or punctuation in the classic text? (In fairness, that's a lot easier with Semitic languages; to this day, Arabs get by on just the long vowels and very sparse punctuation). New versions, like those printed by ArtScroll

, provide them along with translations, though that's sometimes considered cheating by serious studiers.

While much of the text can be dry, every so often one will find unusually entertaining pieces where Talmudic rabbis creatively insult one another or tell wild stories. Even the basic text is practically built on irony and sarcasm, with some of the challenge being figuring out what's meant seriously ("b'nichusa") and what's being sarcastic ("bitmiya").

There are literally entire libraries dedicated to commenting on the Talmud, commenting on other commentators, etc. Some places of study can literally spend an entire semester studying a single page of Talmud. For those who want a broader perspective, the "Daf Yomi" movement is built to spend an hour a day studying two pages (an "amud" is what we call a page, while a "daf" means both sides of a page, i.e. two pages). Under this program, the entire Talmud is finished once every seven and a half years.

The existence of an "oral" Torah was a hotly contested issue before the Roman conquest of Judah; the Sadducees (an extinct political/religious entity tied to the priesthood and Hasamonean kings of Judah) vigorously denied any oral law. Their opponents, the Pharisees (the ancestors of modern-day rabbinical Judaism) accepted the oral law. Today, there are still groups of Jews (Karaites, and the dwindling Samaritan community) that reject the validity of the Talmud.note Disputes over the validity of the oral tradition are rather common in the Abrahamic tradition; the Protestant Reformation in Christianity was largely about the validity of the "Church tradition" that plays an important role in both Catholic and Orthodox doctrine, and there are substantial movements in contemporary Islam (which, it should be noted, is about as old now as Christianity was when the Reformation happened) looking closely at reevaluating the Hadith (the "oral law" of Islam, consisting of things the Prophet is said to have said using modern techniques of textual criticism and analysis to see what he actually said and what he probably didn't). As always, the children follow the footsteps of the parent...

The Talmud was a frequent target of anti-semitic pogroms in the European Middle Ages, due to its denial of Jesus' divinity and a possible claim that he was an illegitimate son of a Roman soldier. Sort of. The figure assumed to be Jesus is mentioned as being alive at the turn of the first century BC, and his step-father is mentioned as being among those martyred by the Romans in 135 CE, making the connection particularly hard to swallow. It's actually unclear if the Talmud ever mentions Jesus or just several people that were named Jesus (or "Yeshu") but regardless, this was the assumption that many used to persecute Jewish populations.

Tropes in the Talmud include: