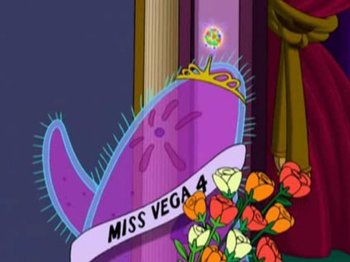 You didn't mention ''which'' world...
"Was this the face that launch'd a thousand ships,note Not that kind.
And burnt the topless towers of Ilium?
Sweet Helen, make me immortal with a kiss."
— Christopher Marlowe, Doctor Faustus

This character is notable In-Universe for having better looks than any other woman in it. She (and it's usually a 'she', but every once in a while can be a 'he' or a 'they') is the World's Most Beautiful Woman.

That doesn't mean her life is going to be easy, of course. These women are almost always So Beautiful, It's a Curse. She may be the target of a Vain Sorceress looking to be the Fairest of Them All, has some unwanted attention, suffer from Attractiveness Isolation (women may get jealous, men may feel intimidated) or she may simply be kidnapped.

Of course, having two (or more) women contending for the title is usually not good, and you really, really, really want to limit it to mortal competitors. Asserting that a woman is more beautiful than a goddess is dangerously Blasphemous Praise. Even...especially if she's another goddess.

The woman is often so beautiful because she is blessed by God, a new goddess, an angel on Earth, or in some other way divine. Depending on the setting and the mythology, this will often lead to some encounter or statement on divinity itself. This connection with the divine and the beautiful is often made in works where Beauty = Goodness.

Just the fact of a character's being hot is not enough to qualify her for this trope. Indeed, many of these women fall into Informed Attractiveness. The character must be explicitly stated to be the world's most beautiful woman, hence why this trope is usually limited to Mythology, Fantasy, and the Fairy Tale, three genres that tend to go light on empirical measurements (was there a worldwide Beauty Contest that every woman alive was forced to enter?).

A common trait of the Hot Goddess and Princess Classic. If it's not just the fact that she's beautiful, but that he feels like she's above him, she's a Peerless Love Interest. Distaff Counterpart to World's Strongest Man, because Men Are Strong, Women Are Pretty. Note that the Real Life examples involve either antiquity, politics, or a direct invocation of this trope. This is no place to simply gush about attractive women, since such a title is so subjective it's meaningless.