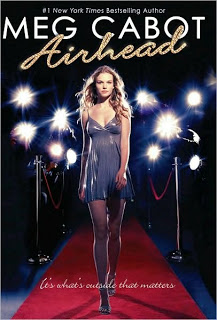 Meet Nikki Howard...or Emerson Watts. Or whoever that is.
In this series written by Meg Cabot, Emerson Watts didn’t even want to go to the new SoHo Stark Megastore grand opening. But someone needed to look out for her sister Frida, whose crush, British heartthrob Gabriel Luna, would be singing and signing autographs there—along with the newly appointed Face of Stark, teen supermodel sensation Nikki Howard. How was Em to know that disaster would strike, changing her—and life as she’d known it—forever? One devastating accident later, and Em Watts, always the tomboy, never the party princess, is no longer herself. Literally. Brainiac Em Watts loses her body in an accident and has her brain transplanted into supermodel Nikki Howard's body. Now she has to deal with fame, the shallow lifestyle she hates and a conspiracy behind the imposing Stark Enterprises.
Advertisement:

Books currently in this series:

Not related to the film Airheads.

Tropes appearing in the Airhead series: