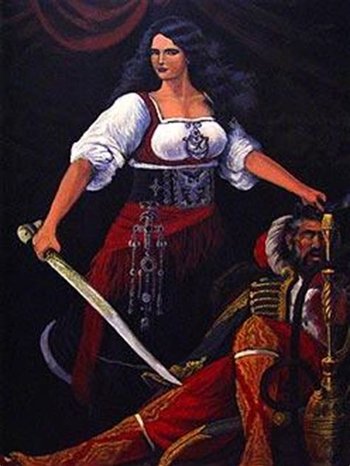 Nora of Kelmendi is a legendary Albanian folk heroine of who is said to have lived during the 17th century when her country was under Ottoman Empire's control, with the date taking place anywhere between the Kelmendi-Ottoman clash between 1637 and 1639. While regarded as a legend, the conflict which she is involved was very real and historically recorded fact.

The legend goes that she was born from a Albanian Roman Catholic warrior from Malsia - the Albanian Highlands - who desperately wanted sons to continue his resistance against the Ottoman Turks, but because he had a daughter he left her in an orphanage. His sister, knowing what her brother just did, picked up his daughter and raised her - albeit, as a boy instead. Nora's father still wanted an heir and decided to train his "nephew" as a fighter and unknowingly made her an Action Girl. Ditching her masculine disguise as she grew, her beauty became renowned across Albania and ended up bringing the attention of an Vutsi Pasha, an Ottoman general from Bosnia, who one day saw her visiting the city of Skhodra with her parents and he fell in love with her at first sight.

Coveting Nora for himself, Vutsi would try to adhere to the laws of the Albanian Kanum by sending a trusted minion to propose to her. Unfortunately for him, the family replied that the Kanum did not allow marriages with non-Albanians. He was outraged and declared that he would destroy her home if he couldn't have her. Here there are two versions of the story of how Nora saves her people.

In the first version, Nora pretended to want to marry the Pasha without the permission of her family. She went to Vultsi's tent who called off the attack and told his troops to rest and prepare to return to Shkodra. While everyone was asleep around his tent, Nora only for her to pull a war dagger that her father had given her that had been passed through her family for many generations. Nora stabbed the pasha, kicked him on back of his head and choked him so he could not scream. At that point Nora could have him killed, but couldn't anymore because by Albanian custom, it is dishonorable to strike a man who is not standing or to hit a man who does not fight back. Nora fled and, as planned, the army of Malsia attacked the Ottomans. Vutsi survived his wounds, gathered his own special unit and followed Nora to her home where the face each other in a duel and she slays him. In the second version of the legend, Nora never goes to the tent. Instead, as the armies fought, several of the Ottomans broke away from the main body of the army to attack the villages. Nora led an army of 300 women against the Ottomans who had set off to burn, pillage and rape. In battle, Nora came face to face with the pasha and kills him in a duel.