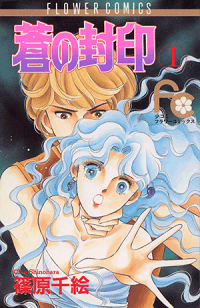 Ao no Fuuin ("Blue Seal") is a shoujo manga created by Chie Shinohara. It was serialized in Shoujo Comic from 1991 to 1994.

The story begins with Soko Kiryu moving to a new area and transferring to a new school, suffering from fainting and dizzy spells due to her frail nature. In the new school, she immediately catches the eye of Kashii, a brute who wants Soko to become his new girlfriend. When she refuses, he tries to rape her in the School Infirmary, but he ends up disappearing and leaving only his clothes behind.

Worried over his disappearance, Soko returns to school and learns that a new guy has appeared and is taking over Kashii's name and position. Nobody remembers the "real" Kashii and this new guy seems just as intent on getting his hands on Soko, though he says it's to kill her, not rape her. He reveals himself to actually be called Akira, of the Byakko family, and that he is tasked with the job of killing Soko, for she is the reincarnation of Soryu, the leader of the bloodthirsty, murderous Oni tribe.

Unbelieving, Soko tries to prove to him that she is not, but when evidence stacks up that she is Soryu, she must admit that it seems to be true. And so they set off on a long journey in an attempt to find out more about Soryu, the Oni tribe and ways on how to prevent them from resurrecting, to take Soko's power of Soryu away from her to turn her into a normal girl.

The manga's background is based on the tale of the Four Gods of Seiryuu, Suzaku, Byakko and Genbu, similar to Fushigi Yuugi.

Ao No Fuuin Contains Examples Of: