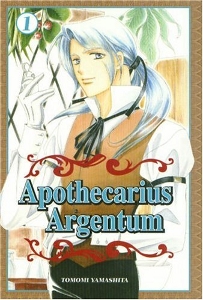 The white-haired pretty boy will see you now.
Advertisement:

Apothecarius Argentum is a Historical Fantasy Shoujo series that chronicles the life of an apothecary (old-style pharmacist) named Argent, and his relationship with the Princess of Beazol, Primula.

Argent is a Basilisk, someone who was fed poisons from birth to make them immune to all forms of toxin, making their very touch deadly and turning their hair silver. They were then sold as assassins and food tasters, after which they were usually killed.

He himself was bought as a boy by the King to serve as the young Princess' taster, and was seen as nothing more than a tool. She however saw a playmate and dining partner, and a budding friendship emerged.

When Argent was later freed by the Princess, he vanished from her life, only to reappear years later as a skilled healer and apothecary. The Princess, now 16 and a bit of a Tomboy, hears of his return, breezily declares him the Royal Apothecary and sets him up with a new shop.

As they interact and renew their friendship, their growing feelings for each other are complicated by her royal position and his inability to touch her for any length of time.

The stage is thus set for a story of royal politics, unfulfilled love, herbalism, chemistry, and learning; these characters love to learn. Whether it's a prince parlaying a love of insects into a dye industry for his ravaged country, or Primula learning that etiquette may mean the difference between making an ally or an enemy of a visiting dignitary, they grow as people by teaching, doing and being taught.

Shoujo Character Development has never been so geeky.