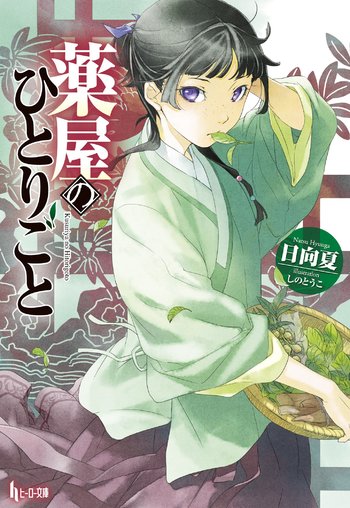 , the novel's first volume was published by Ray Books in 2012. Two years later, it was republished as a light novel series by Hero Bunkoban with illustrations by Touko Shino. There are two manga adaptations, both of which began in 2017; the former (The Apothecary Diaries) illustrated by Nekokurage is serialized in Monthly Big Gangan, and the latter (Kusuriya no Hitorigoto: Maomao no Koukyuu Nazotoki Techou) illustrated by Minoji Kurata is serialized in Monthly Sunday Gene-X. A Historical Fantasy, it is set in a Chinese inspired land.

The series follows Maomao, a cynical pharmacist who worked in the red-light district before being kidnapped and sold as a servant in the imperial court. Wanting to lead a quiet life, Maomao initially hides her capabilities until the death of the crown prince and illness of the consorts forces her hand. Though she attempted to act discreetly, she is caught by the beautiful eunuch, Jinshi. He enlists her as a food-taster and frequently consults her on herbology and mysterious deaths in the court. Despite her wish to live quietly and concoct medicines, Maomao is constantly thrown into a detective role due to the political machinations of the court.

Since November 2020 the light novel series is officially licensed and published by J-Novel Club.

The manga series drawn by Nekokurage is officially licensed by Square Enix and published since December 2020. The French translation is published by Ki-Oon.

The Apothecary Diaries contains examples of: