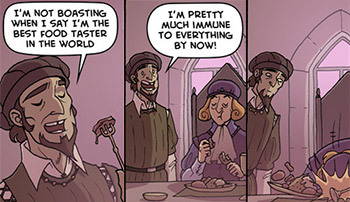 You won't be wanting that, then?
"Mithridatism, it's called. Isn't that a funny name? The process of eating poison to build up immunity. So long as I don't die from it, I'll be harder to kill."
— Jude Duarte, The Folk of the Air: The Cruel Prince
Advertisement:

In short, this trope references the development of immunity to a particular drug or poison by taking small doses for a long time.

Here's a typical scenario: The hero has finally appeared at his confrontation with the Big Bad, who's seated at his ridiculously long table, just about to take his evening meal. "There's no reason to be uncivil," the villain says. Would the hero like some wine? The hero takes a drink and immediately starts choking. The villain laughs — that fool, the hero, should have known that the villain would poison the wine with the dreaded juice of the Ultramurder fruit!

But what's this? The hero's standing back up! "I knew you'd poison the wine with the dreaded juice of the Ultramurder fruit. That's why I've spent years eating small pieces of Ultramurder fruit, to develop an immunity to the poison!" The hero then kicks the villain's tail.

In some cases, the poison builds up and actually turns the poison-proof character into a Poisonous Person.

This can be Truth in Television, or not, depending on the poison in question. For some (chiefly organic) poisons, the body produces antibodies to clear them from the system; so, with repeated exposure to small amounts, you can build up a level of circulating antibody that grants immunity to a typical dose. This is the principle upon which real-life vaccines are based, injecting a deactivated variant of the poison so the body can develop antibodies that will work on the active variant. In the past ages, the few metallic poisons known were rare and expensive; therefore most poisons were plant-based alkaloids.

Should a non-organic poison enter the equation however, this trope becomes a lot less realistic. There are plenty of other poisons that don't get cleared from the system and simply build up in your tissues until you reach a lethal dose. This includes nearly all heavy metals to which modern civilians and industrial workers are exposed, such as compounds of lead, radium, mercury and cadmium; it's why metalworkers in the old days could end up with permanent skin discolorations, and why metalworkers in these days typically have full protective gear.

The official term for immunizing oneself to poison this way is Mithridatism, after a king who made use of the effect. It backfired when he was defeated and tried to commit suicide; his immunity to poison worked so well that he ended up needing to hire a mercenary to run him through.

Could be considered a sub-trope of Adaptive Ability. A particularly Crazy-Prepared person may be immune to several — or even all — poisons via this method, though again it's important to note that in real life, not all poisons can be defended from in this manner. This trope is often key to the survival of someone who is pulling a Self-Poisoning Gambit.

See also and closely related to Removed Achilles' Heel, which is when a character gradually gains immunity to an inherent weakness by repeatedly exposing themselves to it. Compare Radiation-Immune Mutants, for people and creatures who become immune to what changed them.

Kaede learns how the game handles resistances and later uses it to gain full immunity.

Kaede learns how the game handles resistances and later uses it to gain full immunity.