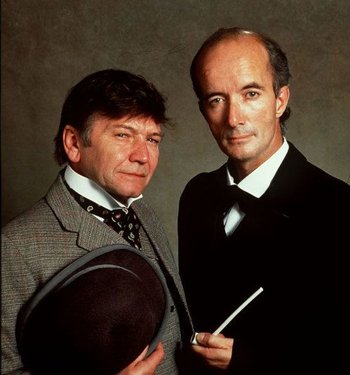 There have been many adaptations of Sherlock Holmes over the years, on film, TV, and radio. But the series of dramatizations done by The BBC for Radio 4 between 1989 and 1998 are unique in that the Beeb managed to do what nobody has done before or since — they adapted every one of the fifty-six short stories and four novels by Sir Arthur Conan Doyle and each production featured the same actors playing Holmes and Watson — Clive Merrison and the late Michael Williams (Judi Dench's husband). The series was produced and chiefly adapted by Bert Coules.

The series was so popular that the BBC commissioned Coules to produce and write a series of pastiches entitled The Further Adventures of Sherlock Holmes which ran for four seasons from 2002 to 2010 with Andrew Sachs playing Watson, due to Michael Williams' passing in 2001.

Also of interest is Bert Coules' book about producing and writing the program — 221 BBC: Writing for the World's Only Complete Dramatised Canon and Beyond available for purchase from here.